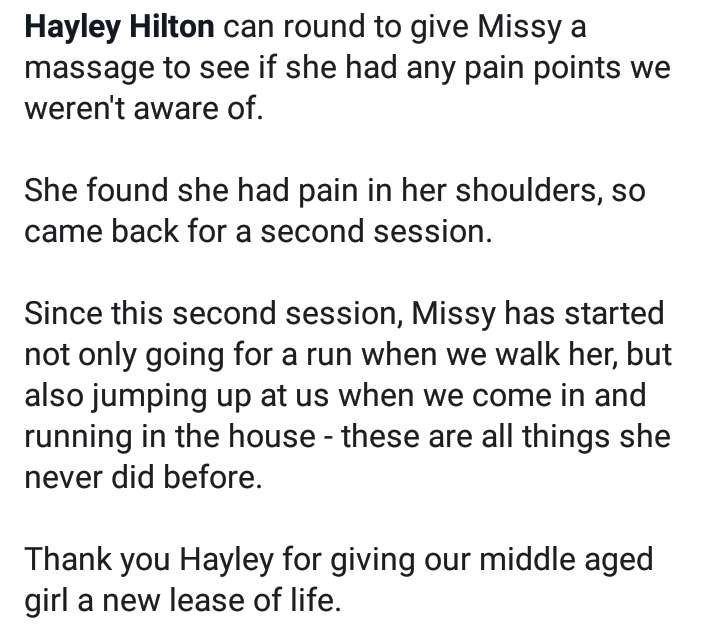 Dogs feel pain in many different ways, like us humans, but unlike us they rarely complain about it. This could be due to a survival instinct where they don’t want to be seen as weak or else they’ll get attacked… or it could just be because they just get on with the pain because they know no different.

Now add the “rescue” aspect to the mix…

…a dog who may have been neglected in her earlier years in a barn somewhere, developing strong survival behaviour amongst her brothers and sisters in order to get food, where a fight broke out and left the puppy with a soft tissue injury that healed on the outside but left scars on the inside.

…a dog who may have been neglected later in life and given cheap food (if any) with low nutritional value, leaving the dog to develop bone or gut defects or a lack of exercise may have resulted in low muscle mass with weight gain that then put extra strain on the joints. Dehydration can also cause long lasting myofascial pain as it tightens around the muscle causing the nociceptors to fire constantly and produce chronic pain.

…and then there’s the obvious abuse cases. A stray boot to the ribs when angry, a punch to the face when he/she has defecated in the house after being left so long all day, or kids left alone in a house slowly torturing their dog and then the dog gets the blame when they have had enough of the pain and retaliate. Off to the rescue centre with the dog then (if they are lucky)!

Working at Cheshire Dogs Home in the past, i can see how much these rescue centres care about the dogs that come through their doors but often they have no full history of their past ordeal and pain signals get missed because the dog has learnt to hide their pain from the outsde world.

The rescue homes do their best to rehome the dog with a loving family but then she just sits on her bed or couch all day but “seems” happy enough when out and about. This is common in a dog with chronic pain because excitement chemicals override their pain signals and they can play with friends or run in a field or even get attention from their favourite aunty who brings them treats.

This happened with an old client of mine, Missy, who’s mum heard me speak at a networking event and got me in to check her over after they had adopted her the year before. The first session i eased the soft tissue and carried out a thorough muscular health check, both before and during the massage. I identified myofascial adhesions preventing the shoulder to move as freely as it should so at the second session i released the shoulder using our dog-specific Lenton Method techniques and i was delighted to be told afterwards that “Missy has started not only going for a run when we walk her, but also jumping up at us when we come in and running in the house – these were all things she never did before”. I was truly delighted to help Missy live a happier life with her new family.

This is not an exhaustive list of issues that may indicate your dog would benefit from getting their muscles checked out by a Canine Massage Guild therapist but it’s a start. I have had the pleasure of meeting many rescue dogs who are living happy lives but a muscular health check at shows revealed a strain to a particular muscle that was then causing other muscles to overcompensate, causing pain elsewhere and fake fatigue. And i am grateful that the dogs and their owners trusted me enough to book the recommended 3 sessions to help their dog with canine massage and many now come regularly for routine maintenance massages to ensure they have optimum health.

So please spread the word about canine massage if you know someone who recently rescued a dog. I can carry out a muscular health check to ensure they aren’t hiding a strained muscle or myofascial pain underneath that tail that is grateful to you for giving them a whole new lease of life and a loving home. 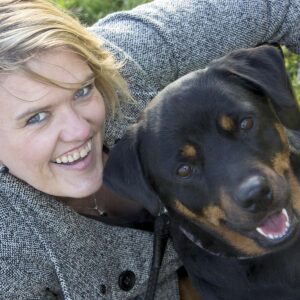